A Rare Protest in China

You won't see or hear anything about this in China, and I feel for the poor man...but he is a hero. 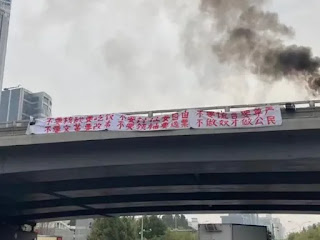 Wearing an orange worksuit and a yellow hard hat, he easily passed off as a construction worker.

But then, he unfurled two massive white banners covered in slogans written in red paint. He set the tyres on fire. As plumes of black smoke swirled around him, he picked up a loudhailer and repeatedly chanted:

"Go on strike at school and work, remove dictator and national traitor Xi Jinping! We want to eat, we want freedom, we want to vote!"

In an instant, the man pulled off one of the most significant acts of Chinese protest seen under Mr Xi's rule, marring the triumphant start of the Chinese leader's expected third term in power."